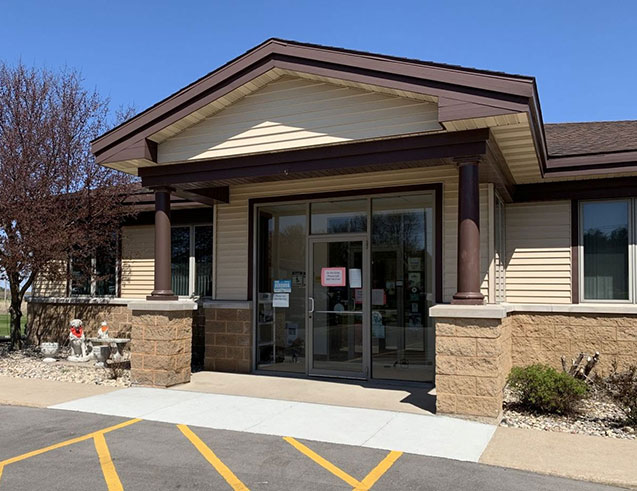 Associated Veterinary Clinic is proud to serve Ripon, WI and surrounding areas. We are dedicated to providing the highest level of veterinary medicine along with friendly, compassionate service.

Our small animal team believes in treating every patient as if they were our own pet, and giving them the same loving attention and care. We are a group of highly trained, experienced animal lovers who are devoted to giving our patients the best care possible. Our large animal team travels within Fond du Lac County, Winnebago County, Green Lake County, and areas of Waushara and Marquette Counties. They provide 24/7 veterinary care for beef, dairy, and small ruminants.

Michael Herrick, DVM - Dr. Herrick graduated from Iowa State University, School of Veterinary Medicine in 1985. He practiced for several years in the suburbs of Chicago before moving his family to East Central Wisconsin. He has a wife and two children and a dog named Max. He has worked at Associated Veterinary Clinic since 2006 and has been a partner in the practice since 2008. His main interests include soft tissue Surgery and internal medicine. He mainly sees dogs cats, but he will also accept rabbits, ferrets, guinea pigs and other rodent species. He enjoys being active in the community and church.

Jesse Repka-Hunter, DVM - Dr. Jesse attended undergraduate studies at University Wisconsin River Falls. She graduated from University Wisconsin Madison in 2004. After school, she practiced small animal medicine in Hudson and Oshkosh, Wisconsin prior to joining Associated Veterinary Clinic in October of 2017. Dr. Jesse primarily cares for dogs and cats. She is married and has two daughters. When not practicing veterinary medicine she enjoys being a 4-H leader, baking, vegetable gardening, food preservation and reading.

Clare Biely, DVM - Dr. Clare graduated from the University of Illinois, College of Veterinary Medicine in 2008. She has since worked at Associated Veterinary Clinic and became a partner in 2011. Dr. Clare specializes in dairy consultation services and bovine reproduction. She enjoys spending time with her husband and two daughters and caring for their cattle, bird dogs, and cat.

William Pipho, DVM - Dr. Pipho graduated from Iowa State University, School of Veterinary Medicine. He has been with Associated Veterinary Clinic since 1998 as a partner. He travels to dairy farms and performs herd health, surgeries and reproduction/obstetric services. Dr. Pipho is married and is blessed with three daughters and a son. He has a Dachshund named Bella.

Ann Marie Miller, DVM - Dr. Ann Marie grew up on a 500 cow dairy in Sheboygan County. She completed her undergraduate degree in Dairy Science at UW-Madison in 2012 and graduated in 2016 from University of Wisconsin- Madison, School of Veterinary Medicine. Since graduation, she has worked at Associated Veterinary Clinic becoming a partner in 2019. Dr. Ann Marie strongly believes that no two herds are the same and enjoys tailoring services and treatment plans to best fit individual farm. Outside of work, she enjoys spending time with her family and is an avid reader. Dr. Ann Marie is married, has one son, and two dogs.

Michelle Reimer - Michelle has been with Associated Veterinary Clinic since 2008.

She is married and has a son and a daughter. She has two cats named Mavis and Archie. Her interests outside work include boating, cooking, and reading.

Danielle Frederick, CVT - Danielle is a Certified Veterinary Technician. She graduated from Madison Area Technical College in 2003. She has been with Associated Veterinary Clinic since 2002. She has a mastiff named Milo and one cat. Her interests outside of work are spending time with her son Wyatt.

Lindsay Berndt, CVT - Lindsay is a Certified Veterinary Technician. She graduated from Madison Area Technical College in 2008. She has been with Associated Veterinary Clinic since 2008. She has two cats named Fritz and Meowser. Her interests outside of work include coaching softball, and also being crafty with cards and her Cricut machine.

Michelle Mindel, CVT - Michelle is a Certified Veterinary Technician. She graduated in 1996 from Madison Area Technical College; and been is this field for 24 years. She recently Started here at Associated Veterinary Clinic in June 2020. Her interests outside of work include Camping with her Husband and Son. She also likes to scrapbook, and make cards. She has Tilly, her Labrador, and four cats Guido, Gravel, Ember, and Tiny.

Carley Wesner, LA/Kennel Assistant - Carley has been with us since 2011. She has a dog named Nellie. When she isn't at work she likes to go on horse rides. She has two horses named Horton and Cocomo. Her interests also include crafting, glitter, and enjoying the outdoors.

We will do our best to accommodate your busy schedule. Request an appointment today!

Leave us a review

TAKE A MOMENT TO REVIEW US ONLINE. YOUR REVIEWS HELP OTHERS LEARN ABOUT OUR BUSINESS. WE TRULY APPRECIATE THEM!